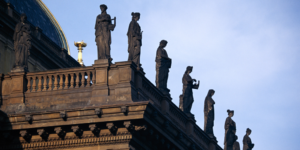 The Republic is a Socratic dialogue, written by Plato around 380 BC, concerning justice, the order and character of the just city-state, and the just man. It is Plato’s best-known work, and has proven to be one of the world’s most influential works of philosophy and political theory, both intellectually and historically.

Plato (428/427 or 424/423 – 348/347 BC) was a philosopher in Classical Greece and the founder of the Academy in Athens, the first institution of higher learning in the Western world. He is widely considered the pivotal figure in the development of Western philosophy.

The three people that exist in society and establishes justice systems

The three classes of people that exist in a city are the rulers, guardians, and producers. The guardians know the difference between what is right and wrong. The guardians safeguard the city and its residents, while the producers supply goods and services.

The guardians must have the desire to learn how to safeguard the city. They must value education above everything and should be courageous. The rulers should possess great wisdom in governing the people and should be incorruptible. A just city should have equality in which there are no affluent and poor people. The three people should exist harmoniously coordinating towards achieving justice for all people in society.

Justice is to be realized at two levels

Justice must be achieved at personal and city levels. Everybody should be responsible for the roles they play in the community for benefiting themselves and the entire city. For example, doctors, farmers, teachers, and rulers. If everyone plays and contributes their part, the community and individuals gain. Individual and communal needs are interconnected to work mutually to benefit everyone.

The city and people have unique parts. The first golden part is creating just laws that govern their cities with a purpose and sense, controlling, and maintaining order. The second silver part is the spirit that mediates between the emotions and reason. The spirit also maintains orderliness and harmony. The third bronze part is being concerned about the people’s body wants and essentials such as food, slumber, and sex. Everyone has three parts, which should be at equilibrium for the existing of both of them.

Ideal justice depends on learning specialization and social systems that define family, habits, and loyalty. People should have equal opportunities to education and wealth ownership to abolish the gaps that may contribute to unjust systems.

The golden rules in life

The golden rules in life, which are: associating yourself with the people that have the desire for your success. People around a person should appreciate the ethical behaviors of the person. The people around you should be supportive of improving your life. Do not compare your achievement with others. The best thing to do is to have your own goals and judge yourself basing on the same goals.

Be honest and truthful. Telling lies will always haunt your conscience. Listen to people carefully to be able to define the problems that make it easier to pursue insightful things in life. We also learn about the immortality of our souls. Identifying your posture and carrying yourself with confidence and high esteem for others to treat you fairly.

Taking care of oneself as you care for others in equal measures, especially about the health of our bodies. The soul lives in eternity and will be judged according to our deeds. City and people’s justice are inseparable. There is no way justice can be provided to an individual without giving the same to the city.

“The heaviest penalty for declining to rule is to be ruled by someone inferior to yourself.”

What to Read Next? Who Moved My Cheese Summary